Trope/s:  Love can conquer all.

He will turn what is into what can be.

Except this time, Daniel Davis hasn’t come back alone.

Four souls have returned with him, would-be protectors who’ve vowed to shield him from this fate. If they succeed, Daniel will turn what is into what can be. And if they fail, his light will dim and fade…forever.

“It’s okay, baby. It’s okay.” Amanda grabbed a blanket from the inside of the vehicle and wrapped it around Daniel, then took a clean cloth and held it up to his chin. He’d need stitches and there’d be one hell of a scar. “Look at me.” He did, still shaking.

She’d almost been a moment too late. A second of hesitation and he’d be dead. What did the intruder want? What had he been looking for? And why did he scream what he did at Daniel?

Let me see your eyes. It’s in there, isn’t it? Deep down you can feel it.

The intruder’s words. Why the eyes? What was in them? What had he looked for? And why would Daniel feel it? Why did all of this feel so familiar to her? She knew the answers somewhere in the back of her memory, just out of reach. Why couldn’t she remember?

This had happened before. It happened now. It would happen again. Unless…

She studied the young boy’s face, the remains of a kind of innocence now lost and something new dawning. He’d never be the same again. Ever. Nobody prepared him for this. Not this young. How did one recover? With time? Without his mother or father?

Daniel began sobbing anew, as if reading her mind about his parents, whom she was sure he already missed.

“You’re—” Her voice cracked and she struggled not to break down in front of him. He didn’t need that. He needed strength. “You’re safe, baby. You’re safe now, Daniel.”

He stared into her eyes now. Was he searching for truth, or to see the depths of her own demons compared to his?

She met his gaze with her own and peered into his eyes. Blue. The blue eyes she’d seen in her recent dreams when he’d appeared much older. Still there, but… She felt her head tilt to the side as she searched even deeper. Beyond the blue. Something else. Something new. Foreign. Fear? No. Fear was on the outside, on the surface, but below the fear in a place he couldn’t feel or know existed inside himself? Shadows. Something that didn’t belong. A blackness, a blackness that swirled around in its infancy, as if waking.

The intruder is responsible for this. He woke this thing.

The blackness stopped moving for a moment. Did it sense her? She stared at it and some part of it intuitively stared back at her. The blackness knew her. They were old acquaintances. And if the thing, this entity or presence…whatever the hell it was…could have sneered at her, she knew it would have.

Have you ever heard a child scream as if their soul was being ripped apart at the seams? Like there’s no safe place in Heaven, Earth, or in-between that’s safe.

Where did these words come from? When did she say them? Part of her understood she never had, and yet another part, the part far back in her mind, knew she had. But when? How could that even be possible? Amanda also understood Daniel’s soul was infected and this thing inside him would take great joy in ripping him apart.

“You’re safe now, Daniel,” she repeated, mostly to reassure herself, only she knew deep down it wasn’t true.

The darkness in Daniel’s eyes began its dance anew.

…it’s going to eat him from the inside out.

Her words again? When did she say this?

“You’re not going to get him,” she muttered.

The darkness found an opening and began to disappear behind Daniel’s eyes, hiding beyond the physical, beyond reach. Beyond her reach. 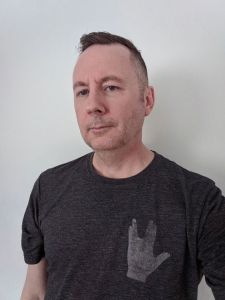 Kristoffer Gair grew up in Fraser, MI and is a graduate of Grand Valley State University. He is the author of 7 novels—some written under the pseudonym Kage Alan—been a part of 6 anthologies, and currently lives in a suburb of Detroit.