Tag Archives: Afflicted to the Core 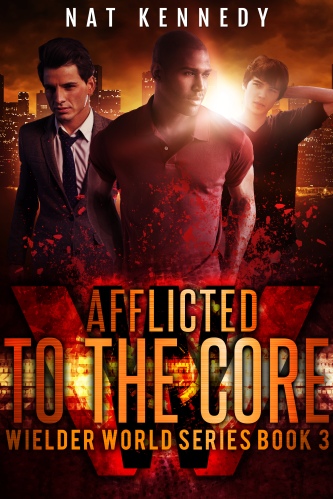 Reggie Wolfe religiously visits Kyle Landon—his student in Nerve detangling—at the Harpford Disentanglement Center, where the younger man has been incarcerated on trumped up charges.  During one of Reggie’s visits, Kyle’s able to warn his teacher of an imminent unauthorized transfer by an unknown shadow agency. Reggie demands help from his sister at the Bureau of Wielder Services but is pressed to take the matter into his own hands when bureaucratic red-tape stymies her actions.  Breaking into a secret medical installation, Reggie and August Whalen find Kyle and six other men hooked to IVs, unknown chemicals pumping into their systems.

The three are caught up in a quest to find an antidote for the drugs and discover who is behind the powerful anti-male Wielder organization.  On this dangerous road, will they forever remain friends or give in to their growing attraction?

Afflicted to the Core is the steamy third novel of the Wielder World series—gay urban fantasy full of desire, desperation, and dedication born of trial and blood.

A small smile brushed Kyle’s lips when he spotted Reggie through the window of the cafe. Reggie lifted his hand in a wave. Kyle jerked his chin up in acknowledgment while that hint of smile burst into a grin. His bangs nearly brushed his eyes, hiding a brow ring that Reggie knew was there. Ah, what a kid.

A kid. Recently just twenty-two. But smart and daring and gorgeous, his insistent heart kept telling him. At times, when he lay alone in bed at night, Reggie reminded himself that Kyle would find someone else. Someone more exciting, more fun, more willing to be open about his sexuality. Eventually, he would just move on.

Kyle yanked the door of Grindworks Cafe open, a gust of cool air flushing in, and joined Reggie at his table. “Going to the Black Castle tonight, wanna come?”

A cold nugget of apprehension lodged itself in Reggie’s belly. The Black Castle—a mostly gay bar and dance club that was once a haven for male cultists until the Mara Murda take down last fall. Most cultists lay low, not drawing attention to themselves. Now, those that hadn’t fled into the dark forest around the lodge occupied rooms in Disentanglement Centers. The members of other cults were keeping their noses clean, according to his sister, Bethany.

The owner of the Black Castle had also been there during the Bureau bust. One August Whalen. A man he owed on many levels.

“No, thanks for the invite though.” Reggie took a sip of coffee. “Say hi to August for me.”

Kyle leaned forward, elbows on the table, every aspect about him all youthful and earnest. “Oh, come on. August would love to see you…and it won’t be me and a ton of other students. I was hoping you could come, and me…and that’s it.” He lowered his lashes, almost shy.

Reggie’s cold knot melted and a wash of heat crawled up his neck and over his cheeks. Kyle’s hand pushed across the tabletop, meeting the halfway line. Reggie looked at it. Black fingernail polish still clung to Kyle’s cuticles. He must have been full-on goth last night, hanging out with his friends.

Reggie jumped in his chair, nearly knocking over his coffee, yanking his hand away from where it had migrated to within inches of Kyle’s, and faced the newcomer.

Professor Sally Boltmier of the engineering department: his senior professor and a close friend of his on campus.

“Sally. How are you this morning?” He gripped the napkin in his lap, crumbling it up into a tight wad, and focused on her, not letting his gaze stray to Kyle.

Her welcoming smile faltered. “I’m great. Sorry to interrupt. I didn’t mean to scare you out of your seat.”

Reggie’s mind stirred to create some excuse and send her on her way, but he couldn’t say anything before Kyle stood and offered his hand.

That pause. Kyle had done that on purpose. The temperature in the room ratcheted to sauna levels. Reggie struggled to hold steady under the gaze of his senior colleague, to not look guilty. No point looking guilty. He wasn’t guilty!

Kyle’s smile brightened. “I know you. You spoke for him in that…case last fall.” Kyle at least didn’t blurt out ‘sexual harassment’ for the entire café’s knowledge.

Sally eyed Kyle, up and down, and Kyle stood tall as if meeting his prom date’s father. Then Sally’s stern appraisal softened, and she nodded and dropped her voice to say, “I knew Reggie wasn’t guilty of any inappropriate activities. So,” her consideration shifted from Kyle to Reggie to Kyle again, “you’ve been together since then?”

Reggie wanted to crawl under the table, maybe dig his way into the linoleum, and hide. He could still salvage this if he got up, spoke out, explained everything. “Well, it wasn’t…we weren’t—”

Kyle’s laughter cut off Reggie’s bumbling. He brushed through his hair, giving it a tousled look, showing off his brow piercing. “Oh, well, we weren’t together, then. But we knew each other.” He looked down at Reggie and gave him such a besotted look, that Reggie knew he was staring back like a devoted Labrador until his colleague laughed and broke him from his trance.

“Well, I’ll let you two get back to your afternoon. Enjoy the spring weather! See you Monday.” She gave Reggie a look that suggested there would be more to this conversation on Monday, but he knew she wouldn’t spread any rumors about him on campus or anywhere else. Except to her husband maybe. They shared everything.

Reggie’s eyes flicked to Kyle. Kyle knew almost everything about him, too.

Nat Kennedy grew up living in a poorly populated desert landscape. With no neighbors in a 1-mile radius, she had to make up her own fun.

Nat strives to create plotty and imaginative fantasy worlds, with the added benefit of gay romance–steamy to tame. Bored of het romance, she jumped into writing her fantasy with gay romance swirled in, like a raspberry ribbon in vanilla ice cream. 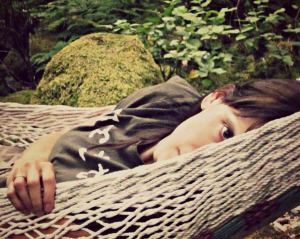 CHECK OUT THE OTHER BOOKS IN THE WIELDER WORLD SERIES HERE

➜Sign up to become a tour host here 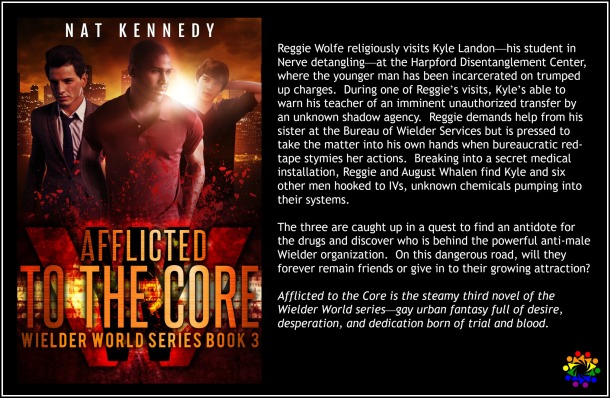