It is a standalone book. 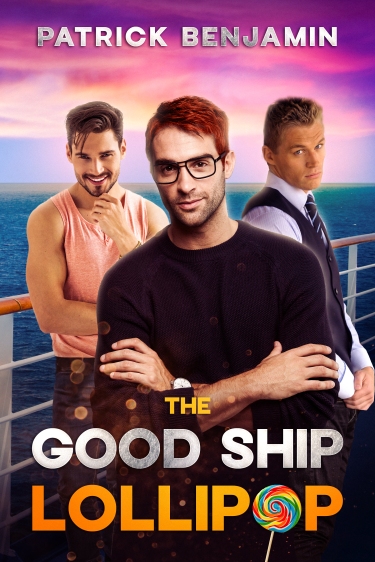 For fifteen years, Kyle and Dustin seemed like the perfect couple. That was until Kyle came home to discover Dustin in bed with a yoga instructor half his age and twice his flexibility. Two years and countless therapy hours later, Kyle has almost put the incident behind him. Being nearly forty and single makes a man bitter, but he’s making do.

Yet, when Kyle’s best friend asks him to be her Man of Honor, on her ten-day Caribbean wedding cruise, Kyle finds himself in a most uncomfortable situation. He ends up trapped on a seafaring vessel for ten days with the man who practically destroyed him.

Face to face with Dustin for the first time since the breakup, unresolved feelings float to the surface, and Kyle and Dustin both begin to wonder if their story is as over as it seems.

While navigating unchartered waters with Dustin, Kyle also meets Jax, a sexy Australian who likes to cruise in more ways than one. Kyle is more than happy to let Jax distract him for ten days. Still, when Jax suggests that he might want more than just a few days of fun, Kyle must choose between the love of his past or the man he could love in the future.

No, absolutely not!” I nearly choked on a spinach leaf.

“You have to come,” Sapphire insisted. “I want you to be my Man of Honor.”

“I can’t get married without you.”

“Sure, you can. There’s no law against it. People do it all the time.”

When Sapphire offered to take me to lunch, I should have suspected something treacherous was afoot. Sapphire and I were like sisters. Sisters of different races and one of them with a penis, but sisters, nonetheless. Our relationship was something enormous and incomprehensible to most people. On paper, we had nothing in common. We had completely different backgrounds and cultural experiences that cultivated entirely different perspectives of the world around us. Despite those differences, we had found each other.

“You spent fifteen years with the man. What are ten more days?” She spoke with her hands. A piece of chicken flung off her fork and onto the table beside us. The senior couple, who were trying to enjoy their eighteen-dollar salads, glared at us like we each had two heads.

“I can’t believe you would miss your best friend’s wedding over a tiny, little, uncomfortable inconvenience like this.”

“A cockroach infestation is a tiny inconvenience. Gonorrhea is uncomfortable. What you’re asking me to do is far worse.”

“Don’t be dramatic,” Sapphire said, waving her hand. “Dustin is not that bad.”

“Isn’t he?” He was too tall, too fit, too classically pretty, and all too aware of the fact. He was narcissistic and untrustworthy, but he was also charming and exceptionally good at putting on an innocent act. He could flash his white teeth and his dimples and get people to believe anything he wanted. Still, if you looked into his eyes, you could tell he was soulless.

“Why would you want everyone to join you on your honeymoon, anyway?” I shifted focus. “I hate to tell you this, but if you can’t stand to be alone with Justin for ten days, you probably shouldn’t marry him.”

“Very funny,” she said dryly. “I want everyone there because I want my wedding to be an experience. An amazing memory we can all look back on together.”

“I am not spending ten days, on a tiny boat, in the middle of the Caribbean, with him.”

“It’s a cruise ship,” she corrected. “Besides, you won’t be with Dustin. You’ll be with me.”

“Lies!” I wasn’t buying any of it. “I know exactly what will happen. You and Justin will be too busy enjoying your Caribbean honeymoon to spend any time with me. Then I’ll be trapped, in the middle of the ocean, with no one to talk to except Beelzebub’s concubine.”

“He’s not going to be the only other person there, you know. Several other people will be in our group. You can make one of them your wingman. My father loves you. You can hang-out with him.”

“Honey, don’t take this the wrong way. If I’m on an exotic vacation, and the only man who wants to spend time with me is your sixty-five-year-old arthritic father, I might drown myself in a bathtub.”

“Don’t be silly,” Sapphire dismissed. “You’ll be surrounded by water. There’d be no need to draw a bath.”

I did not look amused.

“I can’t believe you’re still so angry. It’s been over a year.” It had been eighteen months since the breakup, and yes, I was still harboring, hurting, and hating.

I hadn’t seen or spoken to Dustin since the incident. As instructed, he had been gone when I returned to the apartment. With Sapphire’s help and some very strategic planning, I had avoided him throughout the entire decoupling process.

I left yellow Post-it Notes on everything he could take and was extremely vindictive about it. He could have the Blu-ray player, but not the discs or the TV. He could take the kitchen table, but not the chairs. I even kept the Keurig, though I permitted him to take his pods. What kind of monster drank decaf anyway? I also instructed Sapphire to guard the jazz record collection with her life. I detested jazz music, and we both knew it. I planned to pawn or destroy the albums later.

The first few weeks after the breakup, Dustin tried tirelessly to communicate with me. He sent me text messages that I didn’t answer and left voice mails that I refused to listen to. Dustin tried everything short of smoke signals. He even sent me an old-fashioned letter, which I didn’t open and burned immediately. I had nothing to say to him and had no desire to hear what he had to say to me. I had never been an incredibly trusting person, and his betrayal had reinforced all those walls that I had been trying, for years, to dismantle.

Being the forgiving person she was, Sapphire tried to convince me to give Dustin a second chance. Still, I refused, steadfast in my determination that he’d had his chance. Since then, she had been careful not to mention him. Even though I knew full well that she saw him regularly. He was her fiancé’s twin brother. She had to remain cordial. I did not and had no intention of ever being so.

“You simply have to come. We’re going to so many beautiful islands: Turks and Caicos, Bonaire, St. Thomas, and Aruba. You’ve always wanted to go to Aruba.”

That was true, but still, “If you put us on a ship together, I promise you, I will throw him overboard.”

She smiled wide, her teeth gleaming white against the contrast of her chocolate skin. “That’s fine! Just promise you’ll make it look like an accident.”

“Duh,” was the most mature response I could muster. “I don’t want to end up someone’s bitch in a Caribbean prison.”

Dirty, prison sex would have been the most action I’d seen in a while. Thirty-nine may have been young by hetero standards, but in the queer world, I was practically a spinster. Being classified as an elder gay meant that my dating pool had been reduced to a few categories. First, those men who were so weird or creepy that nobody wanted them, or second, those who were so bitter and jaded by relationships past that dating them was like trying to build a house out of straw. I was a card-carrying member of category two.

Of course, there was always a third group. Younger men. They were excellent in theory, with their zero percent body fat and their permanent erections. However, too often, their perfect bodies and sexual appetites only camouflaged the fact that they lacked any real substance. If brains were dynamite, most of them couldn’t blow their nose. There were always exceptions. Old souls that knew how to converse about more than just Rhi-Rhi’s new album or T-Swizzle’s latest boyfriend. Those younger men wanted more than sugar daddies. Though, I still couldn’t imagine having enough in common with someone who hadn’t even been alive during the original run of Friends.

It wasn’t that I couldn’t get a date. Even close to forty, I was still cute. Not as attractive as I was at twenty, but I wasn’t a hunchback or anything. My deep green eyes matched my red hair, which I kept cropped short to avoid the bozo-clown-realness it would become if left to grow-out. I was tall and still decently shaped, a little thicker in some places than I’d prefer, but that came with age. At least, that’s what I told myself. I had a good understanding of where that put me in the queer hierarchy. Guys would still bang me; they just wouldn’t brag about it anymore.

Admittedly, the realization that I was no longer prime real estate took some getting used to. Before Dustin, I had been a penthouse in Manhattan, but after fifteen years in couple-town, I was shocked to discover I was now a brownstone in Queens. Next stop? Condemned building in Jersey!

That being said, I was optimistic about my life, even if it meant spending it alone.

“The ship is huge,” Sapphire was still talking. “You won’t even really have to see each other. There are also excursions at every port: zip-lining, snorkeling, hikes, surfing. Come on. You can orbit around each other for ten days without committing a violent felony.”

“Great, so I can spend the entire time by myself?”

“There’s going to be thousands of people on this ship. It’s a floating city. If you’re so worried about being by yourself, you could always try making friends.”

“You’ve known me for twenty years. Am I the type of person who makes friends?”

I was about to find out.

This is Patrick Benjamin’s second novel. He was excited to try his hand at something lighter and more humorous than his debut novel (The Road Between). Patrick can most often be found spending quiet evenings at home with his husband, Jarrett and his puppy, Dax. When he’s not writing, Patrick can often be seen performing on stage as his glamorous drag persona Tequila Mockingbird. He also volunteers on the Board of Directors of a non-profit organization that has proudly served the LGBTQ2S+ community for 45 years. 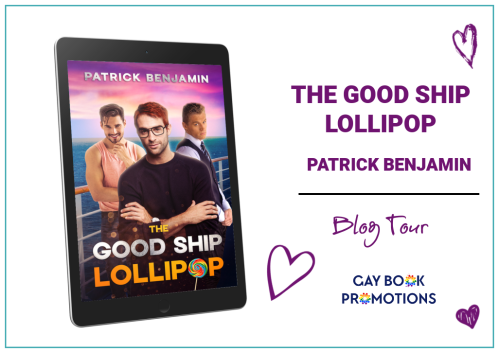 About the Author Lily G. Blunt enjoys writing contemporary gay romance and paranormal stories. She loves to explore the relationship between two or more men and the intensity of their physical and emotional attraction. Angst often features in her stories as she feels this demonstrates the depth of feelings between them. Lily is often inspired by the lyrics to songs and is forever writing imaginary scenes and plots in her head. Only a few of these ever make their way to the page. Lily reviews for several blogs and has recently launched Gay Book Promotions, an online book promotion service for authors of LGBT+ romance and fiction. She loves to hear from readers and other authors. You can find her contact information and social media links at https://lilygblunt.wordpress.com and http://gaybookpromotions.wordpress.com
View all posts by Lily G Blunt - Gay Book Promotions »
← New Release – A Leap of Faith by Mel Gough @melgough_writer @reddogtweets
New Release – The Case of the Boy in Blue by Amanda Meuwissen #KindleUnlimited #giveaway →