Release Blitz – Teach Me to Touch You by Joshua Landon

Book Title: Teach Me to Touch You (Novella 1 in the Teach Me Series)

When Austin’s father deserts his young family, he leaves Austin and his sister to struggle with poverty and neglect at home and bullying at school. When Austin’s first girlfriend kisses him in high school, his PTSD flashback to childhood abuse scares his girlfriend away.

A Marine at eighteen,  Austin returns home after four years with his PTSD aggravated by nightmares of war. He fears he’ll never have a sex life.

Daniel, a psychiatric technician with a speciality in PTSD, helps Austin readjust to civilian life. Over months of work together, trust grows between them along with an attraction they hide from each other, since Austin is straight and Daniel is gay.

A gifted healer, Daniel believes a sexual relationship between them could harm Austin, though Austin is anxious to learn to touch again. But when their visits are scheduled to end, both men must deeply examine their concerns and untangle their desires for the future.

I was seven when my dad left for work in the morning and never came back. My sister Julie was six.

It was a bad year, the first truly awful year. Not that the years before had been ideal, with my parents snapping at each other over each little affront, but at least they’d both been part of my life. And with either parent alone, I’d felt like a normal kid. It wasn’t entirely self-deceptive—it was all I knew.

But the day my dad pushed my mom against the wall, cocking back one huge fist to strike her, I ran to push myself between them.

He’d looked at me, lowered his fist, and never spoke another word to me.

In the morning, he was gone.

At first, the dad-sized hole inside me seemed about to swallow me up. I was sure I’d die like the baby bird I’d found in the yard early that spring. I’d given it water and worms in a shoebox with crumpled toilet paper for warmth, but it wouldn’t eat or drink and grew steadily weaker. When it quit moving altogether, my mother stroked my hair, soothing me in a whisper.

“Its tiny heart quit beating, Tintin. Baby birds are too small to survive without their parents. But you gave it the best care you could. Its death isn’t your fault.”

I buried the bird in the back corner of our Mountlake Terrace yard without fanfare, digging its grave in the frozen ground with icy fingers that held a bent teaspoon. Despite my mother’s insistence that I wasn’t to blame, I knew the truth. I’d failed the bird just as I had failed my father.

A fanboy of books, theater, and cinema and a supporter of the LGBT+ community, Joshua Landon lives in the greenbelt and park-filled community of Lynnwood, Washington not far from Seattle, Edmonds and Everett—a great location to experience the outdoors, music and the arts. He recently authored the three Teach Me novellas, a romance about two young men: a troubled Marine and a talented healer. They will become available for order through Amazon online in multiple countries, releasing between December 23, 2018 and February 2019.

When not writing, Landon enjoys building stage sets, bungee jumping, river rafting, and watching films from all eras. He shares his bookshelf-lined home with a middle-aged tomcat, and his back yard fills seasonally with wild rabbits.

Enter the Rafflecopter Giveaway for a chance to win book 2 in the Teach Me series. 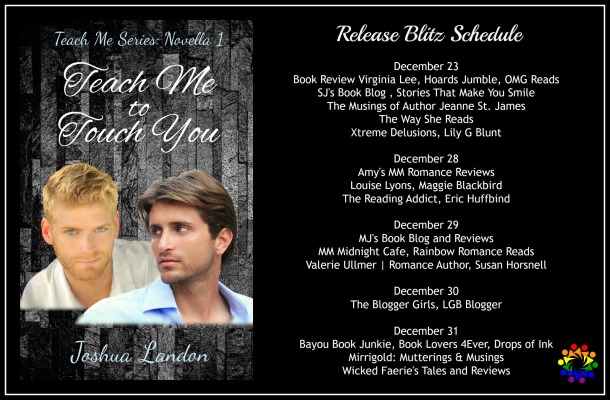 About the Author Lily G. Blunt enjoys writing contemporary gay romance and paranormal stories. She loves to explore the relationship between two or more men and the intensity of their physical and emotional attraction. Angst often features in her stories as she feels this demonstrates the depth of feelings between them. Lily is often inspired by the lyrics to songs and is forever writing imaginary scenes and plots in her head. Only a few of these ever make their way to the page. Lily reviews for several blogs and has recently launched Gay Book Promotions, an online book promotion service for authors of LGBT+ romance and fiction. She loves to hear from readers and other authors. You can find her contact information and social media links at https://lilygblunt.wordpress.com and http://gaybookpromotions.wordpress.com
View all posts by Lily G Blunt - Gay Book Promotions »
← Release Blitz – Kink Aware (Kiss of Leather 9) by Morticia Knight
New Release – Whiteout Conditions – Black Ops Heroes #10 by Dara Nelson (writing as Kendel Duncan) →