This is the first of a new series but each book will stand alone.

Gunnar swore to serve and protect, but he couldn’t save the omega he loved. Will a sick kitten give him a second chance at love?

Police Detective and single dad, Gunnar Justice swore an oath to serve and protect, but he couldn’t save the omega closest to him. Now he’s raising his 8-year-old daughter alone. But when his daughter adopts a sick kitten, will a hot veterinarian with his own secrets offer a second chance at love?

Pursued by a relentless stalker, omega veterinarian, Liam Chandler, packs up his entire life and moves across the country to start over. He has lost faith in romance and instead devotes his time to saving his animal patients. But when a handsome alpha detective and his daughter come into Liam’s exam room with a kitten who needs a miracle, will Liam give romance a second chance?

Can these two men overcome their pasts to make a family together? Even as a final threat from Liam’s past threatens not only their relationship but their lives.

To Love and Protect His Omega is a single dad Omegaverse romance with mystery, action and all of the feels.

If you love Omegaverse m/m romance that keeps you turning pages into the wee hours of the morning, start reading To Love and Protect now! 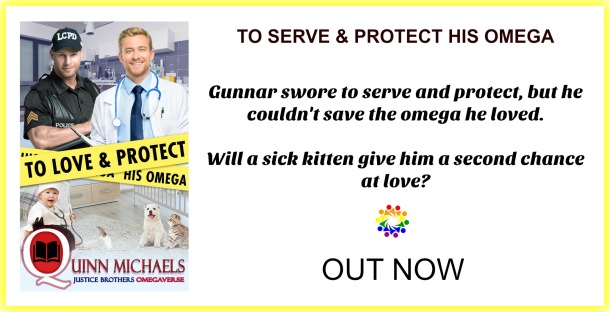 Gunnar pulled the car into an empty parking space two cars back from the bus stop and unlocked the doors. “Get out on the curb and cross with me,” he said.

Normally, Olivia would’ve grumbled about being told the rules again, but this time she just nodded, her lips tight and her face pale. “He sneezed,” she said.

Gunnar nodded. If he was sneezing, at least that meant he was alive.

Gunnar took the carrier with one hand and Olivia’s hand with his other as they crossed the street. It was 8:05, and a young guy, with blond hair and glasses bent down on the ground between the inside door and a partially opened gate as he picked up a white metal box with a red medical symbol on the side.

“Excuse me, sir, are you the vet?” Olivia asked, slipping inside the gap where the gate was partially opened. Gunnar grabbed OlivIa’s shoulder to keep her from bowling the guy over as the man looked up. His nose twitched, and his eyes widened as his gaze rested on Gunnar.

Gunnar smelled it too, the subtle sweetness of an omega mingling with his own alpha musk. Adam had been cinnamon chocolate. This man was more cream and mint, with a hint of… caramel? It was attractive, and Gunnar ruthlessly crushed the sudden desire to get closer and identify that third, underlying scent.

Gunnar didn’t want to be attracted to another omega. Adam had only been dead for a year. This slight stirring of interest – and it was barely interest – felt like a betrayal.

“Puff?” The doctor stood. Getting a better look at his face, Gunnar estimated his age upward. Late twenties, not mid, closer to Gunnar’s own age. Worse, the man was handsome, in a boyish way, his blue eyes bright and magnified a bit too large behind the lenses of his glasses as he ran a hand through his wavy blond hair. He wore a stethoscope around his neck, and thankfully his tone was warm and businesslike as he said, “I’m Dr. Chandler,” looking only at Olivia.

“We adopted Puff from the shelter on Sunday,” Gunnar explained, holding out the carrier over his daughter’s head so that the doctor could see.

Dr. Chandler looked into the carrier, and his lips tightened as the smile faded from his face. He held out his hand. “Come with me.” He opened the inside door. “Carolyn, my tech, is running late, but if you two don’t mind letting me take him into the back, Pam will get your paperwork started while I take a look at Puff.”

“Whatever you have to do for him, do it,” Gunnar said.

From Quinn: I love fantasy, werewolves and M/M omegaverse romance! My goal is to write action-packed adventures of romance, self-discovery and second chances, all served up with a hefty helping of sweet, sexy Omegas and hot, determined Alphas who will do anything to cherish, love, and protect them. It’s so exciting to be able to share my characters and worlds with you, and I hope you enjoy them (and the sexytimes!)

About the Author Lily G. Blunt enjoys writing contemporary gay romance and paranormal stories. She loves to explore the relationship between two or more men and the intensity of their physical and emotional attraction. Angst often features in her stories as she feels this demonstrates the depth of feelings between them. Lily is often inspired by the lyrics to songs and is forever writing imaginary scenes and plots in her head. Only a few of these ever make their way to the page. Lily reviews for several blogs and has recently launched Gay Book Promotions, an online book promotion service for authors of LGBT+ romance and fiction. She loves to hear from readers and other authors. You can find her contact information and social media links at https://lilygblunt.wordpress.com and http://gaybookpromotions.wordpress.com
View all posts by Lily G Blunt - Gay Book Promotions »
← New Release and Blog Tour – Pursuing Happiness by Jessie Pinkham #newrelease #contemporary #gay #romance
Book Blast – Daisy, Yellow by Angelique Jurd #contemporary #gay #romance #exclusive #excerpt #KindleUnlimited →