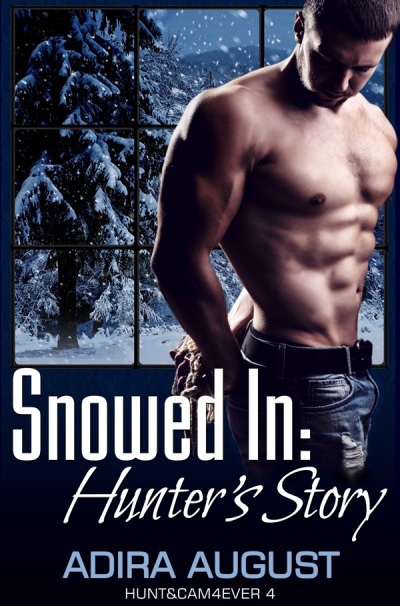 It is NOT a standalone story.

Trapped by the blizzard outside…

Hunter Dane & Camden Snow contend with the storm raging inside.

In the pre-dawn darkness, Hunt moaned and thrashed under the comforter. Finally, the nightmare receded. He settled, breathed deeply several times, and opened his eyes.

“Sure,” Hunter smiled, half-awake, not remembering. “I’m here with you. Safe inside the storm. Away from … all the crap of the last few weeks.”

Cam moved his hands over Hunt’s body, soothing and gentling. “Safe inside the storm.” Not safe from the storm, but safe inside of it. Isolated. Protected. Safe.

But Cam knew Hunter wasn’t safe; his demons came with him: a dark and twisted possession by blood and cruelty and murder. Being snowed-in for days would allow the darkness to eat away at Hunt until his very skin would seem too small. He’d beg Cam for the flogger. And hate Cam for denying him.

There was a solution, but the so-called “Full Metal Dom” was afraid. So very afraid the fragile bonds between them would not survive.

To help Hunter, he had to do the one thing he swore he would never do.

A 28k novella exploring the power of trust. Book 4 in the Hunt & Cam 4 Ever series.

The first three: On His Knees, Matchstick Men and Dancing Men are available on Amazon.

Hunter Dane was a bisexual switch, a sub to men, Dominant with women. As a Dom, he’d had his dick in every orifice, as confidently controlling as Cam was with him. But only with women. If Cam expected him to switch now, Hunter would fail him.

Sitting up, he took his time working Cam’s sweats over his hips, rocking him back and forth, not asking him to lift himself. Cam still wasn’t allowed to put weight on his shattered femur.

“Are you stalling, sub?”

Hunter slipped the sweats off over Cam’s feet. “Yes, Cam.”

Bending from the waist, Cam reached for Hunter, grabbed him by the back of the neck and dragged him up and into a bruising kiss. Cam forced him open, invaded his mouth. His other hand closed around Hunter’s throat, collaring him.

Hunter whimpered, chest to chest, submitting to whatever angle pleased his Dom, waiting for Cam to cut off his air.

Finally ripping Hunter’s mouth away from his own, Cam held him up over himself by the throat. He tightened his grip enough to feel the wildly beating pulses in Hunt’s neck.

“You’ll feel what I make you feel, come when I make you come, or won’t because I say no. You’ll endure punishments I decide on, and do actions as I order. Because I order. Did you forget?”

Cam swiped a thumb over Hunter’s carotid and larynx in comfort and threat. “You’re very hard, now, aren’t you, Hunter?”

“You’ll put yourself in my ass, just the way I want, as long as I want.”

Hunter felt himself sink into the soothing depths of submission. His body relaxed, all his weight for Cam to bear beneath him. “Yes, Cam.”

Cam’s hands glided down over his sub’s shoulders, around and back up, into his hair, claiming him. He couldn’t fix the things eating Hunter from the inside: the residue of the attempt to take his life, the half-decomposed corpse sliding onto a metal table, the torture of a gentle soul who only wanted to bring help to his people. That would have to wait.

But Cam would get Hunter through the storm.

About the Author Lily G. Blunt enjoys writing contemporary gay romance and paranormal stories. She loves to explore the relationship between two or more men and the intensity of their physical and emotional attraction. Angst often features in her stories as she feels this demonstrates the depth of feelings between them. Lily is often inspired by the lyrics to songs and is forever writing imaginary scenes and plots in her head. Only a few of these ever make their way to the page. Lily reviews for several blogs and has recently launched Gay Book Promotions, an online book promotion service for authors of LGBT+ romance and fiction. She loves to hear from readers and other authors. You can find her contact information and social media links at https://lilygblunt.wordpress.com and http://gaybookpromotions.wordpress.com
View all posts by Lily G Blunt - Gay Book Promotions »
← New Release – Why I Need You – Colette Davison
RAINBOW SNIPPETS: February 3 #rainbowsnippets #gayromance #polyamory #paranormal →