Sometimes it’s the cop who needs to hit the floor…

As a homicide cop, every blood-soaked crime scene settled in my bones and snaked around my spine. There was only one way to exorcise the images from my soul …

Inside the club, I stopped to scan the room. He was here, Camden Snow. A Norse sex god in the guise of unpretentious youth. Only his ice-blue eyes gave evidence of the Dom who took whomever he wished, whatever way he wanted, with a look and a nod. Merciless.

Cam found me watching him and fixed me with his arctic gaze. This time, I didn’t walk away. He cocked an eyebrow. Well?

The last thing I needed was mercy.

I dropped to my knees.

Free on Instafreebie until Nov 24th

It was an early summer evening, the sun half set. I was making my way to the door with one of the club’s boozeless Bloody Marys to find a deck chair and keep an eye on whoever came up the stairs. Decide what I wanted after sunset.

The door opened before I could touch it. He paused, backlit by the setting sun. Golden. Glowing. Idealized male beauty wrapped in an invisible cloak of incredible power. He was so careless of it. He scanned me and grinned. As if the sight of me delighted him. No one grinned here. Not with genuine pleasure.

He passed close to me, still scanning. It was the kind of moment that called for locked gazes and hardening cocks. Instead, he happily looked me over like I was a pastry display and he was deciding which succulent treat to select.

Cam was fresh from deep powder and Olympic triumph. Exuding health and vitality and bonhomie and danger.

I wanted to give him everything, simply because he existed. And looked at me.

He reached out and put a hand on the side of my neck, his thumb skating lightly along my jawline and down, across my larynx. My insides turned to water.

His eyes narrowed a little as if he’d heard. His hand tightened – scarcely, definitely – and withdrew.

“Kneel for me when you’re ready,” he said. And was gone.

(Book 2 of 3 in the HuntandCan4ever series)

Some people are SO deadly serious about their games.

Now Hunt has a fresh body and a new puzzle to solve in twenty-four hours if he wants to find a killer.

A 48k police procedural with a liberal dose of M/M hotness. Which means our fave full-metal Dom shows up to collect on Hunter’s offer of his … coffer. So to speak.

There are puzzles for the reader and mysteries to be solved. Based on characters introduced in the short story On His Knees.

Cam looked out the window, leaving me to myself  while I drove us through the quiet dark of the Capitol Hill streets. I wondered why this killer wasn’t perfectly obvious to me. I wondered if it was impossible for me to see them, being so close that everything blurred at the edges and melded together.

“Did anyone ever tell you, you think too much?” Cam asked.

“Did anyone ever not?”

“Take the next alley,” he told me.

“You need to stop thinking.”

The bastard grabbed the wheel and cranked it hard right.

I lifted my foot off the gas, or tried to. He had his left hand on my thigh just above my knee, digging in, pressing down.

“Pull into that parking lot.”

He released me instantly and sat back. I managed to miss the light pole and the dumpster and slide into a parking space behind a converted Victorian housing psychologists’ offices. An appropriate place to stop when riding with a no limits lunatic.

The offices were dark, now, but the mosquito bulb over the back door and the security lights at the rear of the building illuminated the lot. And the car’s interior. Anyone walking by could see us. If they saw us in flagrante delicto, they’d call the cops.

Cam had gone too far. I shut off the engine but before I could turn and bust his ass, his fingers found my seat belt release and he launched himself up and over the console into my space, his big hands slid down my arms toward my wrists. I twisted sideways and we wrestled for control of my hands.

I was at a distinct disadvantage under the steering wheel. He bent me toward him and my head was on his thigh.

He fell back into his seat, taking me with him and manacled me with one hand. But we were sweaty from the struggle and I managed to break his grip, freeing my hands.

He didn’t try to regain them. He simply raised himself and laid his body over mine. My head pressed into his crotch, his weight forced me onto the hard lump of the console.

“You can always safeword you know,” he said. I heard the challenge. The taunting. He was having fun.

“Fuck you,” I grunted underneath him.

I’d never safe worded in my life. Not to “red,” anyway. “Yellow” a few times when I had a cramp or was on call and my cell went off with a dispatch tone.

Safewording might have been an option for me now, if his power and the idea of being at his mercy, of which he possessed none, hadn’t given me a blazing erection.

He’d been betting I wouldn’t go there—confident I wouldn’t safeword. He really was good at this.

I felt his hand at my belt in back. Handcuffs. A thrill of fear and excitement made me choke on air. I struggled again, just enough to feel my inability to stop him from doing exactly what he intended. Jesus, I was hard, weeping against my thigh, trapped by the elastic briefs.

My legs were twisted and caught under the steering wheel. His body locked my right arm against the seatback. He deftly handcuffed my left wrist and calmly found my right and ratcheted the other cuff around it.

This was not the infamous Dom of the club, calculatedly giving me what I needed. Not the sexual virtuoso of last night, expertly bringing me everything I never knew I wanted. Pleasures I never thought existed.

This was the sadist in his element. Loving what he did to me because of what it did for him.

Then, suddenly, I knew who the killer was.

You have to bury the past, or the past will bury you.

An ancient burial urn, empty for millennia, is suddenly not so empty.

When Detective Lieutenant Hunter Dane probes the murder at Natural History Museum, it’s his own past that haunts him. To solve the complex case, Hunter needs the talents of Camden Snow, the brilliant, beautiful, “no limits” Dom who’d helped him unravel a very peculiar, and very personal, murder.

But Cam’s ready to kill Hunt, himself! Their high-intensity D/s relationship that began in a playroom, ended in an emergency room.

“If you want to be with me, you’ll have to do more make some big re-entry gesture,” Cam said. “That’s just more drama. You’ll have to work for this, Hunter.”

“All right. What work would that be?” Hunter asked, eager to perform any penance Cam gave him.

“You’re the champion puzzle-solver and ace detective. Unravel a mystery.”

Hunter’s brows pulled together. “What mystery?”

For adults who love some mystery with their men. A 70k police procedural with a liberal dose of M/M heat. The 2nd of the Hunter Dane Investigations. Matchstick Men, their 1st case, also available on Amazon. Their next case, Psychic Men, will be out in spring of 2018

“You are familiar with the Tamil burial jars case I’m hearing?” the judge asked as she led him into her chambers.

“Enough to know the case exists,” he said, putting his professional face on. Why would they need a homicide investigator for an international property dispute? “I should mention I’m acquainted with Doctor St Clair who was appointed head of the research team.”

“I see,” she said, taking her chair but not inviting him to sit. “Do I have to go over confidentiality? I was informed with you it wouldn’t be necessary.”

“Good.” She sat forward and clasped her hands on the desk. “Expert testimony the Court finds to be compelling establishes the impossibility of determining the geographic origin of the jars or when they were created and sealed without extensive testing. There will be a problem of international relations if I award the urns to the Denver museum and later testing reveals clearly that the plaintiff did have standing.”

Hunter nodded. The judge cocked a skeptical eyebrow at him. “You understand the issue?”

“It will look as if we must have known all along and used a technicality in the law to keep the jars here. I imagine they have more than scientific value?” he said.

A slow and very small smile appeared. “Have a seat,” she told him. He did.

“At my request, Doctor St Clare sent a doctoral fellow to take air samples from the jars to determine how long ago they were sealed. That was ten days ago. I received the results on Friday. So did the attorneys. After which, I issued a gag order.”

Hunter waited for her to get to the point.

“I’m curious, detective, what you would guess the tests showed?”

“At least one of the air samples had a much higher level of carbon dioxide than would be present when the jars were made. And traces of methane, ammonia, hydrogen sulphide and nitrogen. Decomp gases.”

“There’s flesh rotting in one of those jars and it wasn’t put there a thousand years ago,” Hunter said.

Stories That Make You Smile 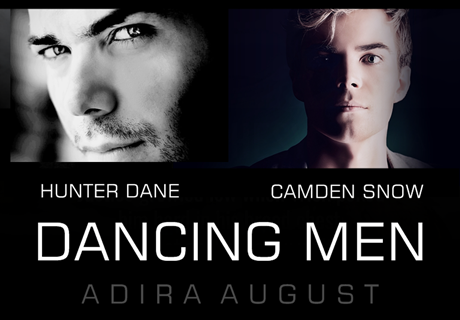 I went to school interminably, it seemed like. I studied anthropology and paleontology and genetics and literature and theology and ancient Greek. I chased down bad guys, raised children, climbed mountains, played poker, searched for dinosaurs and have had a rather large number of lovers. (I’m not giving up any numbers because TMI) Through it all, I wrote.

No wonder I’m so tired.

You can read all my books stand-alone. There’s plenty of information about what happened previously in Hunt and Cam’s story for you to easily follow their relationship arc. The mysteries are always complete within the stories.

I love these guys. They surprise me and challenge me and break my heart, sometimes. They inspire me.

(Just some FYI for the new readers. Hi. Welcome.)

About the Author Lily G. Blunt enjoys writing contemporary gay romance and paranormal stories. She loves to explore the relationship between two or more men and the intensity of their physical and emotional attraction. Angst often features in her stories as she feels this demonstrates the depth of feelings between them. Lily is often inspired by the lyrics to songs and is forever writing imaginary scenes and plots in her head. Only a few of these ever make their way to the page. Lily reviews for several blogs and has recently launched Gay Book Promotions, an online book promotion service for authors of LGBT+ romance and fiction. She loves to hear from readers and other authors. You can find her contact information and social media links at https://lilygblunt.wordpress.com and http://gaybookpromotions.wordpress.com
View all posts by Gay Book Promotions »
← Book Blast – The Glass Ceiling by HJ Perry
Cover Reveal ~ Short Order by Pat Henshaw →