Review ~ Stay With Me by Lily Adile Lamb

Stay With Me by Lily Adile Lamb

It has been weeks since Curtis first saw the young waiter with the haunted eyes. No matter how often he went to the café to find the right opportunity to introduce himself, that moment simply did not come that quickly.
Joseph was aware of the gentle giant who quietly came to have his lunch and then left day after day. Fearing his father’s wrath and under his ever watchful eyes, he made no moves nor overtures. Until one day when the other man approaches to him… 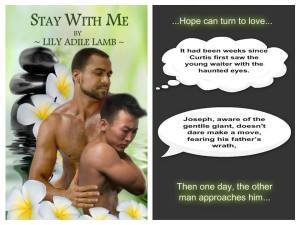 Craig is the strong, protective bear of a man who falls for Joseph, a waiter in an Asian restaurant. This younger man has been abused physically and emotionally by his domineering father throughout his life, but with Craig’s love and support he manages to break free. Overall, it is a romantic story, with two men falling in love and finding happiness together.

I found some of the scenes and descriptions repetitive, plus there were a few inconsistencies and errors. I liked the premise of this story with the contrasting Western and Asian characters and that it was set in Australia. It had great potential. English is Lily’s second language and due to various issues with the first edition, the book received a second edit. As a new author, Lily is learning the craft of storytelling and writing and will no doubt continue to improve with the support and advice from friends in the m/m community. Bravo for having the courage to attempt such a demanding first novel.

Lily Adile is from Turkey. She works as a nurse by day and writes GLBT Romance by night.
She visits her family in Turkey regularly and travel to other countries like Singapore to visit the other family members.
She is blessed with three grown up children and a furry child, JJ Basil.
Lily Adile’s focus in her GLBT stories are on mere mortals because she believes that love is universal. Her mortal heroes are not rich, famous or incredibly handsome males with six pack bodies… rather they are just everyday men who work hard and deal with whatever that life throws at them.
Lily Adile is against bullying in any form. She is actively involved with Marriage Equality and stands by the same sex couples who want to have children. She believes that primarily, a child needs a loving, protective home.
Lily’s biggest regret is not studying English formally because writing stories, consequentially, takes much longer. She still gets there of course, thanks to her bevy of loyal and supportive beta readers, editors and wonderful friends.
Lily especially thanks her husband with all her heart for his endless patience, love and support. He is the love of her life and apple of her eye….he is the home she goes to at the end of a hard day at work.

Comments Off on Review ~ Stay With Me by Lily Adile Lamb

About the Author Lily G. Blunt enjoys writing contemporary gay romance and paranormal stories. She loves to explore the relationship between two or more men and the intensity of their physical and emotional attraction. Angst often features in her stories as she feels this demonstrates the depth of feelings between them. Lily is often inspired by the lyrics to songs and is forever writing imaginary scenes and plots in her head. Only a few of these ever make their way to the page. Lily reviews for several blogs and has recently launched Gay Book Promotions, an online book promotion service for authors of LGBT+ romance and fiction. She loves to hear from readers and other authors. You can find her contact information and social media links at https://lilygblunt.wordpress.com and http://gaybookpromotions.wordpress.com
View all posts by Lily G Blunt - Gay Book Promotions »
← Review ~ A Casual Thing by Annabelle Jacobs
Review ~ Drama Queen: A Nicky and Noah Mystery by Joe Cosentino →