It could be curtains for college theatre professor Nicky Abbondanza. With dead bodies popping up all over campus, Nicky must use his drama skills to figure out who is playing the role of murderer before it is lights out for Nicky and his colleagues. Complicating matters is Nicky’s huge crush on Noah Oliver, a gorgeous assistant professor in his department, who may or may not be involved with a cocky graduate assistant…and is also the top suspect for the murders! You will be applauding and shouting Bravo for Joe Cosentino’s fast-paced, side-splittingly funny, edge-of-your-seat, delightfully entertaining novel. Curtain up!

A light-hearted murder mystery and gay romance peppered with innuendo and a mix of corny and amusing asides. A well-written and enjoyable read that doesn’t take itself too seriously.

The audio version was an excellent production. Michael Gilboe’s voice and fast-paced narration suited the tongue-in-cheek story and made each of the many characters’ voices clearly distinguishable

Joe Cosentino is the author of An Infatuation (Dreamspinner Press), Paper Doll the first Jana Lane mystery (Whiskey Creek Press), and The Nutcracker and the Mouse King (Eldridge Plays and Musicals). He has appeared in principal acting roles in film, television, and theatre, opposite stars such as Bruce Willis, Rosie O’Donnell, Nathan Lane, Holland Taylor, and Jason Robards.

His one-act plays, Infatuation and Neighbor, were performed in New York City. He wrote The Perils of Pauline educational film (Prentice Hall Publishers). Joe is currently Head of the Department/Professor at a college in upstate New York, and is happily married. His upcoming novels are Drama Muscle the second Nicky and Noah mystery (Lethe Press), A Shooting Star (Dreamspinner Press novella), A Home for the Holidays (Dreamspinner Press holiday novella), and Porcelain Doll the second Jana Lane mystery.

Review ~ Stay With Me by Lily Adile Lamb

Stay With Me by Lily Adile Lamb 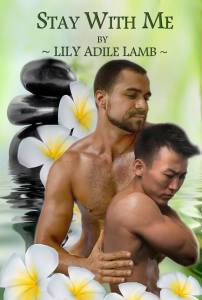 It has been weeks since Curtis first saw the young waiter with the haunted eyes. No matter how often he went to the café to find the right opportunity to introduce himself, that moment simply did not come that quickly.
Joseph was aware of the gentle giant who quietly came to have his lunch and then left day after day. Fearing his father’s wrath and under his ever watchful eyes, he made no moves nor overtures. Until one day when the other man approaches to him…

Craig is the strong, protective bear of a man who falls for Joseph, a waiter in an Asian restaurant. This younger man has been abused physically and emotionally by his domineering father throughout his life, but with Craig’s love and support he manages to break free. Overall, it is a romantic story, with two men falling in love and finding happiness together.

I found some of the scenes and descriptions repetitive, plus there were a few inconsistencies and errors. I liked the premise of this story with the contrasting Western and Asian characters and that it was set in Australia. It had great potential. English is Lily’s second language and due to various issues with the first edition, the book received a second edit. As a new author, Lily is learning the craft of storytelling and writing and will no doubt continue to improve with the support and advice from friends in the m/m community. Bravo for having the courage to attempt such a demanding first novel.

Lily Adile is from Turkey. She works as a nurse by day and writes GLBT Romance by night.
She visits her family in Turkey regularly and travel to other countries like Singapore to visit the other family members.
She is blessed with three grown up children and a furry child, JJ Basil.
Lily Adile’s focus in her GLBT stories are on mere mortals because she believes that love is universal. Her mortal heroes are not rich, famous or incredibly handsome males with six pack bodies… rather they are just everyday men who work hard and deal with whatever that life throws at them.
Lily Adile is against bullying in any form. She is actively involved with Marriage Equality and stands by the same sex couples who want to have children. She believes that primarily, a child needs a loving, protective home.
Lily’s biggest regret is not studying English formally because writing stories, consequentially, takes much longer. She still gets there of course, thanks to her bevy of loyal and supportive beta readers, editors and wonderful friends.
Lily especially thanks her husband with all her heart for his endless patience, love and support. He is the love of her life and apple of her eye….he is the home she goes to at the end of a hard day at work.

Comments Off on Review ~ Stay With Me by Lily Adile Lamb