The Eye And The Arm by Andrew Q. Gordon

Title: The Eye And The Arm

Series: Champion of the Gods Book 2 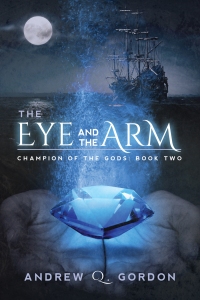 After defeating Meglar at Belsport, Farrell returns to Haven to recover from his injuries, but Khron, the god of war, has other ideas. He gives Farrell a new mission: free the survivors of the ancient dwarf realm of Trellham from their three-thousand-year banishment. To fulfill Khron’s near impossible task, Farrell will need the help of his distance ancestor, the legendary wizard Kel. But Kel has been dead for a thousand years.

Farrell finds information hinting that Kel is alive, so he moves his search to Dumbarten, Kel’s birthplace. To reach Dumbarten unannounced, Farrell and Miceral disguise themselves as mercenaries on board a merchant vessel. Their journey is disrupted when pirates attack their ship. While attempting to subdue the attack, Farrell is struck down by one of Meglar’s minions.

Unconscious and trapped in his own mind, Farrell’s only chance for survival rests with Miceral and the peregrine king Rothdin entering his thoughts and helping him sort fact from illusion. To reach Farrell, they will need to rely on an untested spell from one of Kel’s spellbooks. If they succeed, Miceral can guide Farrell home safely. If not, Farrell will destroy not only himself, but Miceral, Rothdin, and everyone around him.

Miceral took a deep breath. “Will I be able to hear?”

“No, but let’s do it.” He took a deep breath and closed his eyes.

“I need your eyes open for everyone to see.”

He snapped his lids open, blinking several times before could focus again. “Sorry.”

“Master Teberus.” Miceral knew the words came from him, but as promised, he didn’t feel anything. “I have Masters Erstad and Wesfazial as well as Wizard-Priestess Glendora. Ask your questions to Miceral and we four will also hear you.”

“Astounding.” The elder Arlefor glanced at the high priestess. “All four at once?”

“Wizard.” Miceral had heard that tone enough to know Klissmor’s mood. “Maintaining this link, this far away with this many minds, is a strain. If we are to save Farrell, you must focus on him.”

“Of course. My apologies.” Teberus bowed deeply. “My examination of the one who did this to Farrell confirmed that he is no wizard.”

“Then how in the eight gates of Neblor did that man defeat Farrell?” Even though Teberus couldn’t know, Miceral recognized the voice as Wesfazial’s.

“The obvious answer is the correct one. A wizard gave this man the weapon.”

“But Farrell could defeat all four of us and all the other wizards you brought with you and not be tested.” Erstad’s steady temperament sounded tested. “No weapon used by a nonwizard should be capable of this.”

Teberus raised the crest of his hairless eyebrow. “But since that is what happened, we must use it as the basis of our search for a cure.”

No one answered. As the silence dragged on, Miceral’s anxiety slowly returned. If Haven’s senior wizards didn’t know what to do, who could?

“No,” Klissmor said. “Show them. Let them see the memory.”

Miceral closed his eyes and focused on reliving the attack. The clarity of the image caused his chest to tighten, making it hard to breathe. He knew the result, but watching it again, almost in slow motion, added to his agony.

When the image played over again, he realized Klissmor must have been guiding his thoughts.

“Do whatever you need. Just find a way to save Farrell.”

“Your friends are doing all they can. Have faith that Lenore will send us what we need.”

When the memory started for the third time, he didn’t find any comfort in Klissmor’s assertion. The Six wouldn’t—couldn’t—help. He needed something that didn’t exist—a great wizard like Heminaltose or Kel.

“In theory, I recognize the magic.” Erstad sounded confused. “But I’ll need to find a reference to be sure.”

“What about Farrell?” He knew he shouted, or at least what Farrell told him passed for shouting, but he couldn’t prevent it. “He could be dead before you find that.”

“It can’t be helped, Miceral. I need to be sure before I suggest a counterspell. If I’m wrong, whatever I try might kill him.”

“He is in no immediate danger.” Teberus put his hand on Farrell’s forehead. “But my fear is the number of spells that draw on him for power. I can only give him but so much. If he doesn’t wake, his body will burn out.”

“Do what you can, Master Teberus. We’ll begin searching immediately and contact you when we find the answer.” When Erstad stopped speaking, Klissmor’s presence left with him.

“Hurry. Please.” Miceral knew no one heard him.

Andrew Q. Gordon wrote his first story back when yellow legal pads, ball point pens were common and a Smith Corona correctable typewriter was considered high tech. Adapting with technology, he now takes his MacBook somewhere quiet when he wants to write.

He currently lives in the Washington, D.C. area with his partner of eighteen years, their young daughter and dog. In addition to dodging some very self-important D.C. ‘insiders’, Andrew uses his commute to catch up on his reading. When not working or writing, he enjoys soccer, high fantasy, baseball and seeing how much coffee he can drink in a day and not get the shakes.

FIVE Winners will win one e-copy of ANY book* each from DSP Publication’s backlist.

*Giveaway is of any currently released DSPP book, which excludes the books that are on pre-order and “The Eye And The Arm”.

About the Author Lily G. Blunt enjoys writing contemporary gay romance and paranormal stories. She loves to explore the relationship between two or more men and the intensity of their physical and emotional attraction. Angst often features in her stories as she feels this demonstrates the depth of feelings between them. Lily is often inspired by the lyrics to songs and is forever writing imaginary scenes and plots in her head. Only a few of these ever make their way to the page. Lily reviews for several blogs and has recently launched Gay Book Promotions, an online book promotion service for authors of LGBT+ romance and fiction. She loves to hear from readers and other authors. You can find her contact information and social media links at https://lilygblunt.wordpress.com and http://gaybookpromotions.wordpress.com
View all posts by Lily G Blunt - Gay Book Promotions »
← Review of Channeling Morpheus for Scary Mary
The Altered by Annabelle Jacobs →